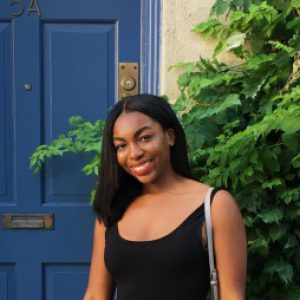 At the Fox IT Career Fair, I had the opportunity to meet recruiters and learn more about positions I never considered taking for internships and post-grad employment. It was important to me to talk to a variety of companies and see what they had to offer even if it wasn’t related to UX Design. I spoke to a recruiter at NBC Universals table and learned about the rotation program they have. It was interesting to hear how I would be able to try out different positions within the company before I decided to pick which one I wanted to stick with.

I spoke with Comcast and EY about the current UX design positions they had. I was given the contact names of recruiters who knew more about those specific positions and later contacted them about more information. Overall it was good for me to see what other positions there are out there for me to apply yo when I’m ready. I sometimes get stuck only looking into UX? Product design but after this career fair, I began thinking of also applying to Product Manager positions.

I had the opportunity to sit in on a panel discussion lead by employees at Google and other companies. The panelist consisted of Product and Project Managers, UX designers and researchers and content strategist jut to name a few. The conversations the panelist were on topics I’ve never considered thinking of like how public policy is related to tech and how to get live tv on Youtube when there are so many devices and people to consider in this process. It was interesting to hear about the different people’s experiences and what they plan on doing in the near future with their passions.

At the end of the event, there was a happy hour networking portion where everyone had the opportunity to network with one another. I met a couple of grad students who are studying Human-Computer Interaction which was interesting because I’m considering studying that subject if I choose to attend grad school. I learned about their school’s curriculum and what made them choose to go back and get their masters. Overall it was a great experience and I made connections that I plan on staying in touch with.

In September, I had the opportunity to go to the Facebook Product Design Summit. Me and 19 other students (both undergrad and grad) went to Menlo Park to experience how product design is incorporated into the company.

I was in Menlo Park for 2 days and each day consisted of different activities. On the first day, we had the opportunity to tour the company. This included Instagram headquarters, the building specific to Oculus and other interesting parts of the company. The designers at Facebook conducted a workshop for us so we could get a better understanding of how they worked on projects. The first workshop was on design thinking. The last workshop was on prototyping in Origami which is a prototyping tool created by Facebook. We ended the day by having dinner with the design team. I had the opportunity to ask them questions about the projects they worked on and what their experience was before getting to Facebook.

The second day of the Summit was more informational. I had the opportunity to hear from recruiters and what they’re looking for. We also had the opportunity to speak to new grads who are working within the company straight out of graduating. One designer was talking about projects she works on is within emerging markets. To end off the day, we got to have a one on one meeting with designers to get feedback on our portfolios.

This experience was great because I got to spend an extended amount of time seeing how Facebook operates. Also being in Silicon Valley was interesting. Everyone I spoke to was in tech in some way.

AWS vs Google Cloud Platform: How Each Platform Compares in Product Reliability and Security

There are many cloud platforms out there to choose from and when companies make the decision to switch to cloud computing, they have the opportunity to reap many benefits. From no longer dealing with physical hardware to decreased expenses, companies can look forward to these changes if they make this investment. Two very well-known cloud platforms are Amazon Web Services (AWS, which we used in MIS 3406) and Google Cloud Platform. Both platforms are commonly used but they have some set differences. A sign in the reliability of both platforms is the fact that many companies use both.  Apple, HTC and Sony Music use Google’s platform while companies like Netflix, Airbnb and NASA use AWS. It’s important to identify the capabilities of each platform before choosing which one to use. I’ll be comparing AWS and Google Cloud Platform as well as highlighting if cloud security is one of the deciding factors on which platform you should use.

The Google Cloud Platform includes a variety of services. They have 50+ products that they offer like Compute Engine and Cloud DNS. Amazon Web Services has a wider range of services they provide. Compared to the Google Cloud Platform, AWS has 200+ products that include Elastic Compute Cloud, DynamoDB and Elastic Beanstalk.  For both companies, the main product used is virtual machines. They basically do the same things even though they have different names (Compute Engine for Google and Elastic Compute Cloud for AWS). An example of how these virtual machines would work is if a company wanted to deploy a single-page website (application), they would create an instance if they’re using AWS or machine type if they’re using GCP, install the appropriate software onto the instance/machine for the application to work and then install the code onto the instance/machine.

When looking at the statistics, AWS is used way more than GCP is used. This doesn’t mean GCP doesn’t lead in certain categories. When looking at the latency test, GCP is better when it comes to how fast an application is responding to your request. GCP also offers its customers unique billing options like Build-your-own-server type and sustained used discounts. Like we mentioned in class, companies can benefit from switching to cloud computing but when it comes to picking a platform it’s important to understand the structure of your own company and what leads in importance. If it’s product options, AWS is a great choice because of the variety but if it’s cost, looking into the different payment options GCP has can be your companies deciding factor.

Another important factor that comes into play when deciding on a cloud platform is cloud security. Companies that hold important information or just simply don’t want to be subject to security threats can’t overlook this category. Cloud security is a combination of settings and procedures that help protect data and infrastructure on cloud-based systems. Cloud security is one of the reasons for reduced expenses. There is 24/7 security that doesn’t require much assistance from an IT team which ultimately reduces admin.  AWS and GCP often compete when it comes to the best security options because it’s an obvious selling point. From reading the article “Google Tries to Beat out AWS at cloud security”, Google has tried to differentiate itself from its competitors by trying to catch up to what AWS is already doing but by also doing something new like creating an API that prevents data leaks.

Overall AWS is the leading options but GCP is making strong efforts to give customers different choices they haven’t seen before. Whether that’s in pricing or cloud security, each platform has benefits of its own.