Josie Smith is for new freshman, transfer students should look at Mary Jones.

Josie Smith declares MIS as her major at the end of her freshman year.  She knows that she has a requirement of 1000 points in order to graduate and she wants to start working on the points as soon as fall semester starts. Josie who is currently a novice, does not want to just be a Candidate when she graduates, she wants the Grand Master badge on her site and she wants to be on the leaderboard which means that she has to get at least 1500 points! 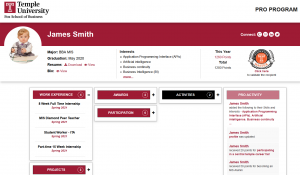 The first thing that she does in the fall semester is she creates her portfolio.  She is taking MIS 2101 so that course gets her started with the basic portfolio.  She knows that she has to have at least 75 points upon completion of MIS 2101 according to the MIS course checkpoints document or else she will get an incomplete.  Josie could have also started her portfolio on her own since she declared MIS as a major already and all of the information on how to start an portfolio is on the PRO Site but since she is taking the class, she follows along in the class.   She submits her basic portfolio and gets her first 50 points, which she can see on her Professional Achievement dashboard.  Here she can also see how she is doing compared to other students who are comparable to her class wise and she can track how she is doing in regards to graduation. 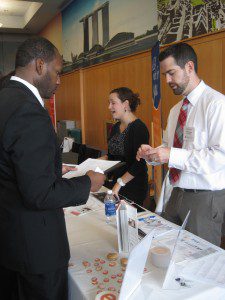 Josie is not satisfied with just having 50 points at the end of the fall semester so she also signs up for the IT Career Fair in the fall.  She knows she is only a sophomore but it is never too early to start networking or trying to get an internship!  Plus the IT Career Fair gets her another 50 points.

Meanwhile, Josie has also signed up to be part of the Association for Information Systems or AIS.  AIS is the student organization for MIS students and they hold weekly meetings and workshops where students can earn points.  Josie ends up attending five professional development workshops held by AIS during the fall semester and earns 50 points.

The Spring semester rolls around and Josie decides to take a look at the PRO Points Calendar.  She sees an interesting event that is happening in a few days on campus about launching her own website so she signs up for the event.  Since it is preapproved and on the PRO Points Calendar already, she does not need to do anything else prior to her attending the event except register.  After the event, Josie logs in to her Professional Achievement dashboard and clicks on manage points to add in the website event she just attended.  She knows that she has to submit this event within three months of attending so she makes sure to do it right away so she does not forget.  Josie submits her supporting documentation, which in this case, is her nametag from the event.  In a few days, she checks her Professional Achievement dashboard and she sees that she has earned 25 points for attending a professional development event at an external organization. 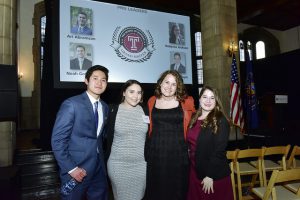 Spring semester also brings about the big event for MIS students, the IT Awards Reception.  Since Josie knows how important it is to network, she signs up for the event.  After the reception, she receives another 25 points.  While Josie did not attend any more AIS workshops this semester, she was still an active member which means she has an portfolio, she attended at least 7 speaker series meetings, 1 social event and 2 community service events so that gets her 50 points.  That brings her up to 200 points for sophomore year at Temple!

Josie was able to secure an IT related internship at NBCUniversal during the summer.  Upon completion of her summer internship (which was more than 8 weeks), Josie submits her request for professional achievement points.  She attaches her offer letter to her request and in a few days receives 400 points for completing the internship.

Junior year rolls around and Josie is even more involved in AIS this year.  She is an active member, both in the spring and the fall semesters, and she attended 5 workshops in the spring (150 points).  She also attends the IT Career Fair (50 points) and the IT Awards (25 points) again this year.  Josie was a volunteer at the IT Career Fair this year and received 25 points for assisting with a department event.

Josie and a team of other MIS students entered into the Temple Analytics Challenge in the fall and received 50 points for participating.  She also attended a professional development event off campus and did get it preapproved beforehand.  She earned 25 points for that.  Josie was also invited to meet with an IBIT Executive in Residence during the spring semester and received 25 points.  She is now up to 1050 points at the end of her junior year. 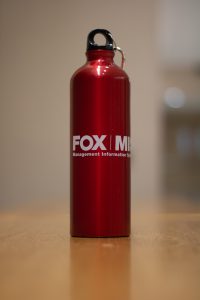 Josie wants to have some MIS schwag so she visits the PRO store to redeem some of her reward points.  She knows that redeeming her reward points will not affect her PRO points at all.  She decides to get a water bottle and a MIS pin to wear at the events in the fall.

At the beginning of her senior year, Josie has enough points to graduate but she wants that Grand Master Badge so she stays engaged.  Josie is involved with AIS this year again.  She is an active member, both in the spring and the fall semesters, attends five workshops and is also an AIS committee member (165 points).  She also attends the IT Career Fair (50 points) even though she has a full time offer from NBCUniversal.  You never know when you will want to change jobs so Josie networks and makes her connections.  She reported that full time job offer and received 100 points for submitting her offer letter. 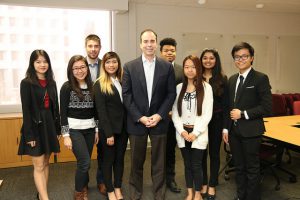 She also attends the IT Awards (25 points) again this year and an IBIT small group meeting with industry.  Josie was also a volunteer at an IBIT sponsored symposium and received 25 points for assisting with a department event.  She also participated in a class project (which was preapproved by the instructor) and received 50 points.

Josie and her team enter the Temple Analytics challenge again and this time they win!  They receive 100 points for this.  They also enter into the AIS National competition and receive 50 points. This brings Josie up to 1615 and she has her Grand Master badge on her portfolio now!

Since it is time to graduate, Josie wants to redeem the rest of her Rewards points so she visits the PRO store and cashes the points in for some cool stuff! 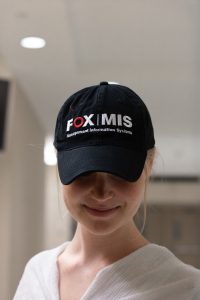 Summary Accelerate your business with Microsoft Azure IoT NetCom Learning brings to you a 2-hour masterclass where your team can get every doubt sorted while learning about the Microsoft Azure IoT Developer (AZ-220) certification. Help[...]
Oct
20
Thu
all-day WOPR Summit 0x01
WOPR Summit 0x01
Oct 20 – Oct 21 all-day
What is WOPR? WOPR Summit is a hacker con. A “Hacker” what? Yup, just that. While we celebrate technology and its oddities, we love and recognize the construct that hacking is a state of mind:[...]
10:00 am Cyber Security Webinar || Stage ...
Cyber Security Webinar || Stage ...
Oct 20 @ 10:00 am – 10:45 am
When it comes to larger or more complex organizations, managing cyber security risks requires a more intensive approach than implementing basic security protection. Embedding risk-based security controls, managing the security of supply chains, and carrying[...]
Oct
21
Fri
9:00 am The 3rd Annual No Limits Leaders...
The 3rd Annual No Limits Leaders...
Oct 21 @ 9:00 am – 12:00 pm 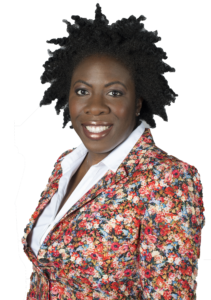 Summary Solve complex business problems with time-tested combinations of Azure products and services and prepare your business for the future. Increase efficiency and productivity with our Microsoft instructor-led session and help your teams learn the[...]
View Calendar
Add