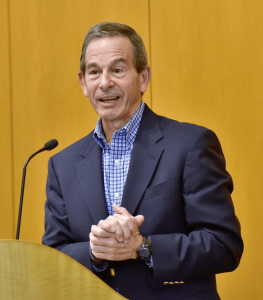 During his years overseeing information technology organizations for several large corporations, Bruce Fadem was always surprised that many new employees, even those with newly awarded degrees, were not well prepared for real-world challenges.

“Their knowledge was three to five years behind the times,” Fadem said. Temple’s Department of Management Information Systems is an exception, in part thanks to Fadem and his fellow members of the Fox IT Advisory Board. One of the board’s primary goals since coming together in 2006: helping MIS keep its curriculum contemporary.

“We’ve found a way to change the curriculum on a fairly frequent basis, which is not the norm for large universities, said Fadem, the IT Advisory Board Chairman. “Tech changes quickly and it’s become a critical component of everything we do. … It’s important that students are exposed to and understand it and know how to deal with the new technology and how it can be applied to business processes and products to help companies achieve their goals.”

Fadem, who retired as Wyeth CIO after a 20-year career, reluctantly agreed to found the advisory board, which is today composed of senior IT executives from well-known firms such as AmerisourceBergen, QVC, Pfizer, and NBCUniversal. Fadem explained he’d served on similar councils at other universities—where they used the boards to rubber stamp projects they’d already launched.

Fox’s IT Advisory Board worked differently from the start. Besides keeping curriculum current, board members and their firms engage in symposiums, student competitions, career fairs; provide insights on projects; conduct guest lectures and mentor students, as well fund scholarships and other activities.

“When I talk to students, I try to get them to understand that your career isn’t a series of well-defined steps. It’s shaped by circumstances and opportunities and you have to take advantage of them and adapt,” Fadem said. “I feel so fortunate in my professional career. I got dropped into MIS at Temple when it was still a relatively unknown unit, fast forward to today, I ended up being surrounded by very, very good people – board members, MIS faculty and staff, and students – who carried the organization and me on their shoulders to becoming one of the top MIS programs in the nation.”