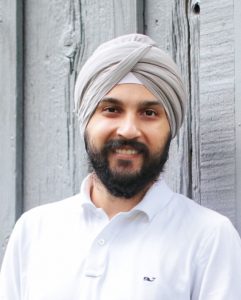 As a solutions architect at Amazon Web Services, Ashneet Gujral (BBA ’11) draws on what he learned during his time at Temple MIS every day. “My job revolves around finding strategies for customers and partners. I focus on compliance and security frameworks,” he says. He can’t disclose many details because his projects are related to government agencies, but in general Gujral advises customers on building business solutions.

“I really wanted to work for Amazon,” he explains. He’s been with the tech giant since last September, but he’s worked with different kinds of clients, including those in the healthcare sector, in the past. “I’ve always worked with businesses whose main focus has been something other than technology. I wanted to challenge myself to go beyond what I had been doing,” he explains.

This ambition goes back to his time as a student. “At Temple, our professors always encouraged us to go beyond the curriculum. If we wanted to experiment or try something more advanced, we were encouraged,” Gujral says.

He recalls assisting professor David Schuff with a research project that dealt with social networks. “I built a tool for gathering data,” he says. The project gave him valuable experience in building something based on customer requirements. “That’s something you learn by doing, and this was really hands-on,” says Gujral.

He also cites professor Paul Weinberg as a mentor. “He was a key professor for me. He gave me a lot of guidance in my early days and taught me what to expect in industry beyond what we learned in schoolwork,” says Gujral.

One aspect of his education that he draws on regularly has little to do with technology. He says his time at MIS taught him something unexpected: People skills.

“When I was still a student, I learned how to participate in meetings in a meaningful way,” he says. It was as a member of the MIS student organization, the Association for Information Systems (Temple AIS), where he picked up the interpersonal skills that are a part of his success today.

“I learned how to resolve conflicts when you don’t agree. There are times when I’ve been in meetings when we’ve been talking about multiple tech solutions that all have pros and cons. Having MIS as my background, I understand the tech part, but I can also explain why one solution is better than another without offending anyone,” he says. “I learned how to recognize when my solution is not the best one.”