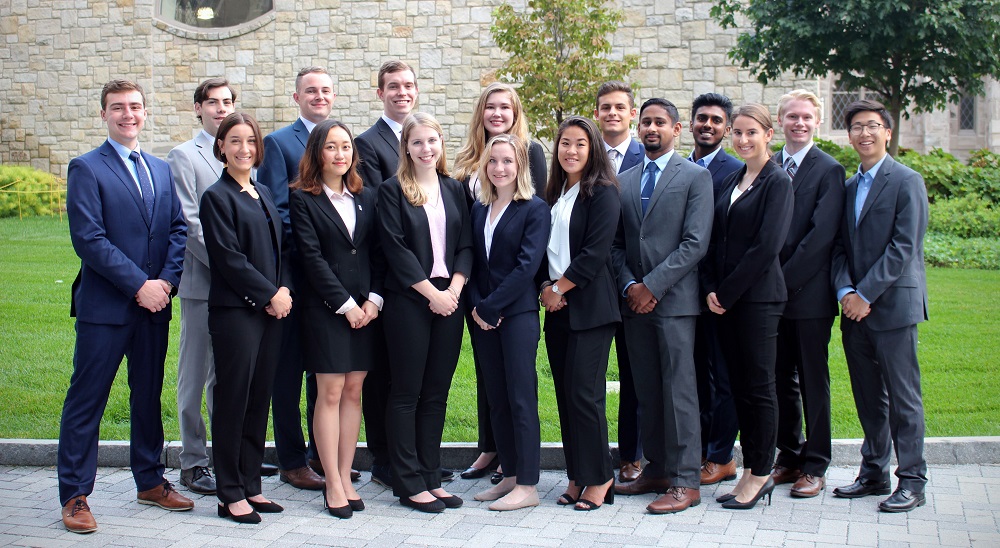 “We are truly honored to receive this award on behalf of this year’s and last year’s leadership team,” said Kevin Publicover, senior MIS major and president of Temple AIS. “Keeping our members engaged was a big challenge during the pandemic, but we were able to successfully pivot online last Spring and keep our organization going this year.”

“I’m proud of what Temple AIS’ leadership has been able to accomplish during a difficult year,” said Steven Sclarow, assistant professor of MIS and faculty advisor for the student chapter, “This award reflects the hard work of the entire team.”

Temple AIS has many activities that provide their members professional development opportunities that also serve the broader community. Notable initiatives include creating a coding club for middle school students at the Tanner Duckrey School in North Philadelphia and launching the Optimize Consulting Group, which provides pro-bono technology services to non-profits.

The project can be found at misdemo.temple.edu/tuh29326/apiproject.

The API found at https://openweathermap.org/current could be used in a multitude of ways. The OpenWeatherMap API provides current weather data for free that can be retrieved by zipcode, city name, geographic coordinates, and many more fields. A user could utilize this API to simply check the current weather for where they live, for an event they might be attending, or for a city they might be traveling to. I only created a demo for the user to enter a zipcode, but with a simple change of the input form and ajax request, any of the other fields mentioned above can be utilized. The API is also free for up to 60 calls per minute with a simple email registration.

It’s been another great year for Temple MIS. We are proud to have hosted the 10th Annual Association for Information Systems (AIS) Student Chapter Leadership Conference. The first conference was held at Temple in 2010, and the opportunity to bring it back to Philadelphia was exciting. In addition, three Temple AIS student teams placed in the Alexion Analytics Challenge track and our student chapter took home two awards.

Our signature event with the Institute for Business and Information Technology (IBIT), the 19th Annual Fox IT Awards, was a great success. The honorees were technology innovators and leaders Angela Heise of Leidos, John Collier of Wawa, and Himesh Bhise of Synacor. IBIT also launched the Digital Innovation Foundry, a hub for assessing, integrating, and prototyping digital technologies.

Read about our successful alumni, including Google Swarm Engineer Bryce Buffaloe, MIS ‘10, who is using data to tackle the opioid crisis. We also profile Clare Perretta and Anthony Pizzuto, graduates of the MS in Digital Innovation in Marketing, who are applying what they’ve learned to advance in their careers.

Nowadays, most people have access to social media software, such as Facebook, Instagram, Waze, and the host of apps found on their phone. These softwares, so called applications, have some level of artificial intelligence (AI). The programmed AI shows the user an advertisement that the user might be interested in, or shows the fastest route based on traffic conditions. AI has improved people’s lives more by helping people be more efficient. Additionally, it can teach itself to do the work of a human and they are more accurate and faster than when a person does the work. Hence, AI will lead this generation into the next advanced innovative society.

Throughout MIS 2502, we have learned with R how to interpret data and make decisions. With the help of the program, the work has gotten much easier and more accurate, but we still have to follow our intuition when we make decisions such as, how many clusters we should have to interpret most accurately, or how many nods we need to have within a decision tree, or deciding whether the chart is junk or not. All these decisions can be taught and learned from experiences. However, there is still a chance of making mistakes or interpreting incorrectly. With the help of AI, we can minimize the risk so that we can maximize our scarce resources.

More than 90 percent of the data we have today was generated within last two years. It is nearly impossible for humans to have access to all that data and make precise decisions interpreting them. However, AI can not only have access to all the information but can also interpret and make the most accurate decisions, better than a human’s intuition. For example, Google’s DeepMind has created an AI called AlphaGo that plays a board game called “Go” which has infinite combinations of moves. AlphaGo had access to records of all the games ever played and learns from them. It also has access to the internet so it can learn new moves instantly as it is playing the game. Ultimately, make its own decision that it thinks has the highest possibility of winning. AlphaGo played against Lee Sedol, the Go grandmaster, and the result was victorious. This kind of moment shows that an AI is more accurate and effective than a person who is at the highest level one can be.

The API found at https://api.chucknorris.io/ could be used for entertainment purposes. A user decides they would like to hear some funny jokes. First, they would enter the number of jokes they want in the text box. If the button is clicked and there is no number, an error message pops up. Then need to decide if they want to choose a category or random. If they decide to pick a category, they must choose an option from the drop-down menu and click the “Generate” button. If they decide to choose random, they must click the “Random” button. Then the number of jokes select show up on the right side.

One of the first things that stood out about the ETL Capstone project was how important it is to be thorough in conducting research at the beginning of a project.  Without being diligent and evaluating many options, we would not have found the tools suitable to meet the needs of our project sponsor. This project also teaches students the importance of making slide decks clear, concise and informative. The student presenting is responsible for conveying that information properly and in a way that keeps the attention of the audience. It can be hard to grab the attention of the audience, and boring them with too many words on your slides is a quick way to lose all of their focus. In addition, the key element is to ensure that the needs of the client are met to the fullest possible extent. While we all had our own ideas and experiences with different tools, what was crucial for us was whether or not our tool met the needs of the project sponsor. Achieving an organized stream of communication with our sponsor allowed us to do our research while also making sure his requirements and timelines were met.

Our task was to transform raw data on thousands notable deaths scraped from Wikipedia into a
high-quality dataset that can be used for statistical analyses.

I learned hard skills like coding in Python, and leveraging advanced features in Excel and Google Spreadsheets. I also learned how to evaluate and compare proposed projects based on requirements and technology, as well as how IT organizations are structured. Finally, I learned soft skills like how to communicate efficiently with other teammates, manage deadlines, and mediate and resolve conflicts.

For this project I researched various API’s, therefore I learned more information about them and how they work. I learned different ways of how a RESTful API can influence a web page. With the information that I learned, I used it on improving my code by getting the API to properly work how I wanted.

Link to the proof-of-concept work: http://misdemo.temple.edu/tuc53942/Currency%20Converter%20API_files/