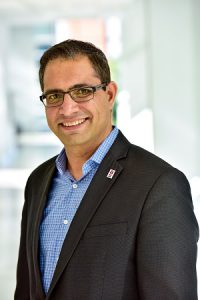 Fifteen years ago, it was possible to do strategic planning on a five-year timeline. That was before technology changed the global economic landscape. For some, this constant disruption brings frustration. But not for Sunil Wattal, Associate Professor of MIS at the Fox School. “Digital transformation—that’s the thing I love most,” he says.

Wattal’s research has appeared in prestigious journals including Management Science, MIS Quarterly and Information Systems Research. He’s interested in social computing and innovation in the tech sector. “Most of my work has been on online consumer behavior and the different phenomena in how people behave online,” he explains.

Over the course of his career, his research projects have tracked with seismic changes in trends. Some of his early research examined email marketing; it showed that consumers responded negatively when companies used their names in sales emails. Later, his attention turned to crowdfunding and ridesharing platforms.

Wattal and his colleagues were among the first to research crowdfunding back in 2013. “We looked at Spot.US, a donation-based platform to fund journalism,” says Wattal. An analysis of data from the platform showed how seeing the giving behavior of others—each donation amount was visible on the website—affected consumer behavior.

“We thought that seeing a lot of people contributing would make someone more likely to contribute,” says Wattal. To his surprise, the research found that the reverse is true. People seem to want to give where their gift has more impact, not to a project that already has plenty of funding. That study also revealed that projects that took longer to get funded got more reader engagement than ones that were funded quickly.

Today, Wattal’s research has pivoted to answer emerging questions. How do consumers react when a company uses its Facebook fan page to push them to an e-commerce platform? Preliminary findings suggest that shoppers on average may not like it, and may unsubscribe from the fan page. He’s also interested in cryptocurrency. “What are the factors that make an ICO successful? Do social media mentions play a role?” he asks.

“Whenever you digitize something, you are not only making it more convenient but you’re also creating all this data and opportunities for research,” says Wattal. “Things are getting transformed in such a way that the next few years are unimaginable.” And for him, nothing could be more exciting.