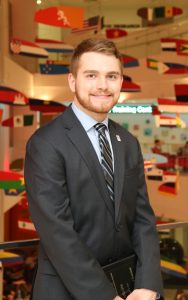 Receiving notable recognition for a research paper is not what senior Eric Koeck originally set out to do.

What started as Koeck’s summer research project turned into a presentation he delivered at the 2017 Winter American Marketing Association (AMA) Conference in Orlando. The paper, “Tweets, Retweets, and the Brand Positioning of the 2016 U.S. Presidential Candidates,” is co-authored with two professors from Temple University’s Fox School of Business – Dr. David Schuff and Dr. Susan Mudambi.

Koeck, a 22-year-old senior who majors in Management Information Systems (MIS), utilized different tools to scour the Twitter feeds of each presidential candidate. Then, he analyzed the difference between word choice and how those words affected the virality of their tweets. To do this, candidates were split into two groups: insurgent candidates (or those who never held political office with their respective political parties) and establishment candidates (those who had).

“I’m very interested in data analytics and I wanted to complete a project that would give me the opportunity to work with that,” said Koeck, a Collegeville, Pa., native. “I was forming this project when the presidential primaries were in full swing. I’m interested in politics and an active Twitter user. It lined up nicely as something into which I could really immerse myself.”

The main findings, Koeck said, showed that insurgent candidates were more likely to express both positive and negative emotion, as well as gender references, while establishment candidates were more likely to express affiliation. In addition, the traits most positively linked to retweets were negative emotion and female gender references.

Impressed organizers of the AMA conference waived Koeck’s fee, and his travel expenses to and from the conference were sponsored by Temple’s Creative Arts, Research, And Scholarship program.

“It was a really great experience,” he said. “I learned a lot about academia and business research. One professor from a university in Canada asked me to send her my presentation, because she was interested in her students following the election closely.”

While Koeck remains humble, his capabilities, as they pertain to research, have not gone unnoticed.

“They were both wonderful,” Koeck said of working with Mudambi and Schuff, Professor of MIS. “Dr. Schuff has been mentoring me on this project the whole way through, and Dr. Mudambi helped us integrate different marketing concepts into the paper so that it was appropriate for AMA. Dr. Schuff’s work is relevant to my interest in analytics and statistics, which made sense for our collaboration. I was really glad when he agreed to work on this with me.”

As the trio work to get the paper published in an academic journal, Koeck prepares to present the project to state legislators at Temple Undergraduate Research Day April 24.

Future opportunities for Koeck, a graduating senior, already have sprouted. Said Koeck: “Starting in September, I’ll be working for PricewaterhouseCoopers in their Advanced Risk and Compliance Analytics practice. I interned there last summer and had a good experience so I’m excited to start my career there.”