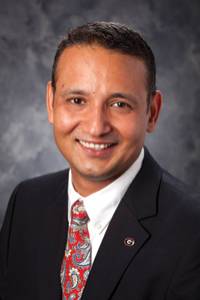 The MIS Visiting Scholar Series engages leading academics in a short residency at Temple. As part of the residency, the scholars engage with Fox faculty, doctoral students, and Institute for Business and Information Technology board members.

According to MIS Department Chair David Schuff, who created the program to foster collaboration and bring in new research and teaching ideas:

“The Visiting Scholar program is a great way to gain new perspectives from top faculty in the field, and also to share with them the great things we are doing at Fox.”

Tiwana, an expert in platform ecosystems and IT architecture, has collaborated with organizations such as UPS, SAP, IBM, Lilly, and Toshiba. During his Temple visit, he led seminars on industry relevant research. Tiwana also engaged in one-on-one collaborative sessions with faculty, met with members of the Fox IT advisory board, and served as a guest speaker in a doctoral seminar.

The series will host one visiting scholar per semester. The next visitor is planned for Fall 2018.

What you say and how you say it may be just as important in online interactions as it is in face-to-face conversations. Especially, if you want to be thought of as a leader. Assistant Professor of MIS, Steven L. Johnson and colleagues recently analyzed the language used by members of threaded discussion boards to determine who was a leader, and who was perceived to be a leader.

The research was conducted by asking members of the boards who they thought were influential. A method Johnson describes as similar to a nomination process.

After “controlling for the obvious: formal role, boundary spanning and centrality” the team came up with about 3,000 potential leaders. They then looked at the written texts posted by the 59 nominees and compared them to the 3,000. 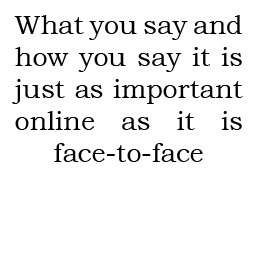 They found that people who are thought of as leaders:

These findings superseded whether or not the emergent leader had a formal title or position, although having one (such as administrator or moderator) did sometimes help a person get nominated.

The research was conducted by looking at all the posts in a one-year period of three online communities—all of which had a computer technology focus.

Johnson says that he was surprised, when they began the work, that there weren’t more studies done “that looked at how we wrote.”

The new findings provide, he says, empirical evidence that supports what most people in leadership theory believe. “To be a leader, you have to have good communication skills.”

When is it a good idea for state governments to spend more tax dollars? When that money goes to information technologies, it turns out.

Min-Seok Pang, Ph.D., Assistant Professor of Information Systems, Fox School of Business, is a self-proclaimed “news and political junkie.”  That interest lead to a question: what is the value of IT in the public sector? While there has been extensive research on the fiscal value of information technologies in the business sector for the last couple of decades, little has been done about evaluating the way in which government spending on IT affects or improves services or efficiencies.

In the business world, the research has demonstrated that more investment in IT leads to improvement in firm performance in terms of productivity, profitability, or market value. But, in the public sector there was only anecdotal evidence illustrating that the correct use and implementation of information systems in public organizations could save taxpayers’ money, for instance, by digitizing business processes, which can save time, or improving transparency of an administration.

Pang and co-authors Dr. M.S. Krishnan, University of Michigan, and Dr. Ali Tafti, University of Illinois, Chicago, first compared all 50 states to see which was most efficient, measuring efficiency by looking at how much money various states spend to produce the same level of government services. They then looked at the level of IT spending to calculate the cost savings.  Finally, they compared spending data, from 2001-2004, from 44 U.S. state governments.

If one state spends more money to produce the same amount of government services than other states, that state is less efficient than others. I found that the more tax revenues a state government spends in information technologies, the more efficient it is.

How efficient? An additional $1 investment in IT made by a state’s chief information officer (CIO) leads to a savings of $1.13 in the state’s administrative costs, in terms of operational expenses and capital deprecation. Somewhat surprisingly, the savings was highest in rural areas. “Cost savings from $1 IT investments are larger when a state is more rural. But it does make sense – if a state is more rural, it has to maintain more state government offices and operations in remote locations (a DMV office for example). Providing government services via the Internet can save costs for both rural residents and state governments.” Pang said.

Pang’s research is one of the first rigorous scientific studies with a large-scale dataset that measure returns on IT investments in governments. With declining tax revenues and mounting budget deficits, some public-sector organizations have scaled back their investments in IT in recent years.  Pang’s study shows that it is not a wise move. He believes that government IT officials can use the study to convince taxpayers and their representatives that IT investments generate sufficient returns to the public to justify needed, strategic, spending on IT.

Learn more about Min-Seok at: http://community.mis.temple.edu/minspang/

Dr. Paul A. Pavlou was named one of the World’s Most-Influential Scientific Minds for 2014 by Thomson Reuters, which published its list of honorees in June, 2014.

The Milton F. Stauffer Professor of Information Technology and Strategy at the Fox School, Pavlou joined more than 3,000 fellow scholars across 21 fields of study for being among the world’s most-highly cited researchers. Pavlou’s papers received more than 12,000 citations over the last decade, as he became one of 95 researchers honored by Thomson Reuters in the field of Economics & Business.

What factors drive us to lend money online to people in far and distant lands? That’s the question behind Professor Sunil Wattal’s latest study, which sought to determine whether cultural differences and/or geographic proximity affected someone’s inclination to lend money through an online platform. Findings suggest that we’re more likely to give to someone similar to us, even when donating through a website that seeks to neutralize cultural gaps.

To compile data, Wattal and his team analyzed more than three million transactions that took place between 2005 and 2010 via Kiva.org, an online investing platform that helps fund entrepreneurs in developing countries. Through a crowdfunding model, Kiva facilitates peer-to-peer lending from individuals (i.e. investors) to burgeoning businesses across the world.

While cultural differences have previously been studied as a source of friction in extended interactions, the goal of this study was to determine how said differences affected the act of selecting a transaction partner. The conclusion? Lenders do, in fact, prefer someone both culturally similar and geographically proximate to themselves.

In addition to its findings, the study recommends to Kiva approaches to overcome this cultural barrier to lending, specifically with respect to their “reputation rating system” for microfinance intermediaries. The team also discusses the broader implications for pro-social lending, online crowd funding, and electronic markets.

Professor Wattal was recently appointed Associate Editor of the prestigious MIS Quarterly, which seeks to enhance and communicate knowledge concerning the development of IT-based services. Wattal’s study is forthcoming in MIS Quarterly.

Professor Paul Pavlou explains that “guanxi” is “a close and pervasive interpersonal relationship” which has received little attention in e-commerce theory and practice, perhaps due to impersonal nature of online markets that assume that no interpersonal relationships exist or are necessary for online transactions to take place. He proposes that computer-mediated-communication (CMC) technologies can mimic traditional interactive face-to-face communications and enable a form of guanxi in online contexts, what he and his colleagues call in this research swift guanxi – consumer’s perception of a swiftly-formed interpersonal relationship with a seller that consists of mutual understanding, reciprocal favors, and relationship harmony.

In the research, they develop a model that explains how a set of CMC technologies (instant messaging, message box, feedback system) facilitate repeat transactions with sellers by building swift guanxi by mimicking interactivity and presence with sellers. Longitudinal data from 338 buyers in TaoBao (www.taobao.com), China’s leading online marketplace show that the effective use of CMC tools helps build swift guanxi by enhancing the consumer’s perceptions of interactivity and presence with sellers. In turn, swift guanxi predicts consumers’ actual repurchases from sellers on Taobao in the future, supporting the ability of IT-enabled CMC technologies to build guanxi and facilitate online transactions.

The research is forthcoming in Ou, Carol, Paul A. Pavlou, and Robert Davison (2013), “Swift Guanxi in Online Marketplaces: The Role of Computer-Mediated-Communication Technologies,” MIS Quarterly, (forthcoming).

Professor Sunil Wattal measures the business value of personalization in a forthcoming article on firms’ use of different types of information for email advertising. When firms use product-based personalization, consumers respond positively. On the other hand, consumers respond negatively when firms are explicit in their use of personally identifiable information (e.g., a personalized greeting). The negative response to personalized greetings is more intense for consumers who are not familiar with the firm.

The study shows the the benefits of personalized e-mails and also highlights consumers’ concerns over the use of information in personalization. The research is based on a unique data set of over 10 million e-mail advertisements sent by a website to over 600,000 customers.

The article titled ‘What’s in a “Name”? Impact of Use of Customer Information in E-Mail Advertisements’ has been accepted for publication in Information Systems Research.

Professor Paul Pavlou assesses the state of research on information privacy and applies an integrative perspective to propose new research directions in a forthcoming article. The new directions include improving the tools to implement privacy, creating measures of privacy that incorporate multiple levels of thinking and analysis, and identifying strategies and concepts that influence willingness to share information.

The article proposes a multi-disciplinary approach to future research that goes beyond definitions and individual beliefs and addresses important outcomes such as business value, information assurance and risk, standards, and how privacy influences and changes marketing and transactional relationships between firms and customers.

Professor Paul Pavlou in a forthcoming study challenges the prevalent assumption that trust and risk are always influential on transaction decisions, and that there is always a need to build trust and reduce risk irrespective of context. The study specifies the boundaries of trust and risk on transaction activity in the context of the two largest online marketplaces, Amazon and eBay.

By specifying the boundaries of trust and risk, this study aims at sensitizing managers about the trade-offs in the design of institutional structures in online marketplaces.

The article (co-authored with David Gefen) titled “The Boundaries of Trust and Risk: The Quadratic Moderating Role of Institutional Structures” has been accepted for publication in Information Systems Research (ISR).